In August of last year my nephew left Alaska to begin culinary school in Boulder CO. He called us last week to tell us he had joined the Army! We were definitely shocked, but not surprised. My husband and I are both Navy veterans and my dad (his grandpa) was a Marine during Vietnam, so military service and pride runs deep in our house. We were just shocked he chose the Army LOL Needless to say he won't be living that down anytime soon :)

He flew home to Alaska on Saturday for 9 days and his 20th birthday was on April 2nd. I was at work one night last week after he had told us about the Army when the idea for his birthday card popped into my head....I was going to combine the 2 big chapters of his life right now, culinary and military. As soon as I got home from work I pulled out the Recipe for Happiness set from MFT and got to work.

I've never colored a camo pattern before so I looked at my husbands camo uniforms from when he was in, and then I had a friend send me a close up picture of his Army uniform, since he is serving right now and the uniforms have been updated over the years. I colored the entire chef uniform with a base color of E31 and then with 3 different greens I just did short, quick strokes across the uniform to create my camo pattern.

My layout is from last weeks sketch at The Paper Players. The camo paper was on clearance at my local JoAnn's and the embossing folder is a Cuttlebug one.

Thanks for stopping by! 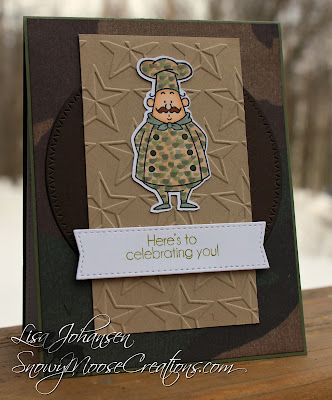