It's a Twilight Tuesday Blog Hop!

I love Twilight. I resisted it for a while, telling people I had no interest in it whatsoever. I've never been much of a vampire fan and I didnt think this series was something that I'd like. Then one day my daughter brought home a copy of Twilight from the library and I said what the heck, I've got nothing else to read. Ever since then I've been hooked! I've read all the books numerous times and cant get enough of Edward :)

Then my friend Holly introduced me to the Twilight Tuesday Challenge Blog. Oh man, what more could a Twilight fan ask for!? Now the blog is celebrating its first anniversary and what better way to celebrate than with a blog hop!!

There is a whole year of challenges to choose from and I decided to do 2 of them.

The first challenge I did was #11, A Cullen Christmas. I love Christmas, and I love the Cullens, so what better challenge than this one for me to try my hand at!

I decided to do a Christmas card the way I thought Alice would envision Christmas. At times Alice annoys me a bit because she is so dang perky, but on the other hand you know you can always count on her. Anyway, back to Christmas :) I see Alice having a very traditional Christmas, with large wreaths,lots of bows and a big Christmas tree with tons of presents under it. I chose this stamp because I like the simplicity of the house, but yet you still get the warm feeling of the holidays from it. Although Alice has the tendency to go overboard on things I can totally see her doing a simple outdoor display such as this. The image is watercolored and its hard to see, but I used white craft ink for the snow and a blender pen with gray to create the way the sky looks when snow is moving in. 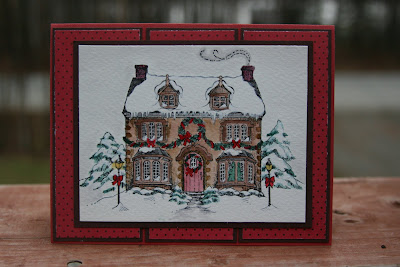 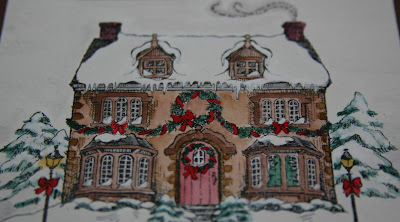 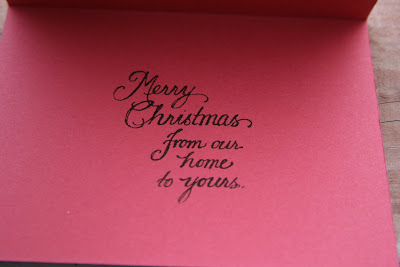 My 2nd card is for a more recent challenge....#51, Edward and what that character means to you. Personally, when I think Edward I think of eternal love and someone who is there for you no matter what. In the movie where Edward and Bella are dancing in the gazebo and he leans down to brush his lips against her neck....that scene right there is a wonderful example of Edward. His tenderness, the love he has for Bella and how much he wants her to retain her soul and human life.((sigh)) I ♥ Edward. My card is a representation of how he sparkles, both inside and out. The chipboard was sponged in Riding Hood Red, then I added Dazzling Diamonds to it. Along the right side I used my Edward stamp to make a watermark image down the side,and then added the 'Forever' over it. 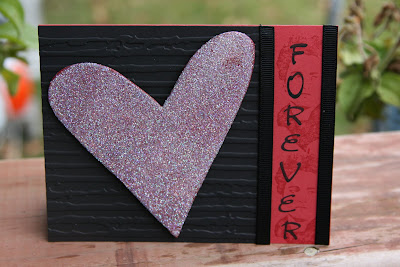